More than a Birthday: My Adoption Story

32 years old, young TODAY. Traditionally on my birthday I like to share some fun facts accompanied by a quintessential quirky outfit! This article is sort of like that, but perhaps a bit more heartfelt. Last November I had the pleasure of sharing my adoption story during a television segment on Univision. It was very special. Not only did my mom accompany me on TV, but I had the unique opportunity to recite my story in my native language, Spanish.

32 January 4ths ago, my 16-year-old biological mother gave birth to me. She named me Marina and very courageously gave me up for adoption. I was cared for for the first five months of my life at Los Pisingos orphanage in Bogota, Colombia – my city of birth. My mom tells me each baby received incredible one-on-one around the clock care. We were even fed home made (Spanish-style) baby food. I practically came out of the womb with a plantain addiction!

My adoptive parents (this is the only time I am going to refer to them as that because they were put on this earth to be my parents – we might as well share blood) are the most worldly, accepting, self-less people I’ve ever met. My mom grew up in Jersey (was high school classmates with Meryl Streep!) and my dad was raised across the river in NY. They were both American and the children of two loving families. My mom lived abroad in Paris in her early 20s all by herself. I honestly don’t know how she lived that far away from home…snail mail was the only form of communication. The number of times I call or text her in a day is slightly embarrassing. But she always dreamed of experiencing the Parisian culture so she made it happen and returned to the states fluent in French! My dad studied abroad in Spain and fell in love with the Spanish culture. He learned Spanish fluently and was determined to land his first “real” job in an industry that would allow him to use his new language! Long story short, my parents met on the job in NYC. They had a short engagement (ours was only five months!) and were married by June of 1972. This year will mark their 48th wedding anniversary!

Just as he had hoped for, my dad’s career relocated him throughout Latin America. He and my mom moved to Puerto Rico as a young married couple. My mom picked up Spanish very quickly – apparently the French she learned in Paris was a huge help. Three years later they were placed in Caracas, Venezuela, and while my dad sold elevators, my mom taught JEWISH school children (how ironic!) English! At that point my parents were in love with Latin America, but their families were all in North America. So every summer they’d return to the states to visit family. One of those summers my mom found an article in the New York Daily News featuring a NYC lawyer who was facilitating adoptions out of Colombia. Once they returned to the states for the foreseeable future in the late 70’s, they decided to seriously pursue adoption.

Colombia in the 80’s was pretty “sketchy.” The drug cartels were out of control. There was a lot of criminal activity. But like any other couple going through the adoption process, the adoption agency performed home inspections, background checks, and took finger prints. Their paperwork was held up over and over again because the Colombian government was tending to more pertinent issues. It took them almost five years to finally adopt my older sister Kyla in 1984. We are from the same orphanage but from different biological mothers. I cannot imagine how frustrating this must have been, BUT I am so grateful it happened. We could have ended up with another family.

Evidently one Colombian baby would not suffice so they adopted my sister a sister (me!) four years later. It was a much smoother process the second time around and I literally HIT! THE! JACKPOT! To clarify, I HIT THE ADOPTIVE PARENTS JACKPOT. What are the chances that two Colombian babies would end up in the home of Americans who were not only fluent in Spanish but who embraced and loved the culture?! SO MANY STARS HAD TO ALIGN…and it gets better. During my childhood, my dad’s company relocated US to Puerto Rico. It was those 3.5 years of my life where I was immersed in the Latin culture, language, and food. This is where my love for “tostones” (friend plantains) began! I met my very best friend to this day, Megan, the first week I was there and she was a bridesmaid in our wedding. I left the island with a very strong grasp of the Spanish language and an immense appreciation for my Latin heritage.

This Colombian adoptee (LOL) went on to spend most of her adolescence in Connecticut, before attending LSU where I obtained my Bachelor’s Degree in Textile and Apparel Merchandising – surprise, surprise! Eventually I met and married Jonathan (but that’s a book for another day), and a few years after moving to San Francisco, I returned to Colombia for the first time in 30 years. It was wonderful and I got a kick out of Jonathan’s new Spanish vocabulary. #BlessHisHeart. I went to Colombia for one sole purpose: to see with my own eyes the country where I was born! I had no ulterior motives. But visiting Los Pisingos felt like the right thing to do during my time in Bogota. I brought a suitcase full of women’s clothes and children’s toys (items on their donation list) and had a great conversation with the assistant administrator of the facility, Gloria.

Gloria was fascinated and proud of my life in the US. We shared photos and stories as well as a book of thank you letters from the newly adoptive parents. As I leafed through the book, my mom’s handwriting immediately stood out to me. It hadn’t changed A BIT and neither had her voice or sincerity. I immediately felt emotional. My parents definitely shaped me into the person I have become today and I am forever grateful. They are always supportive of my dreams and aspirations. I cannot imagine my life without them. A match made in heaven. Thank you for reading my adoption story.

It wouldn’t be a birthday without a celebration dress! Shop the look here:
Dress c/o | Shoes c/o | Earrings c/o 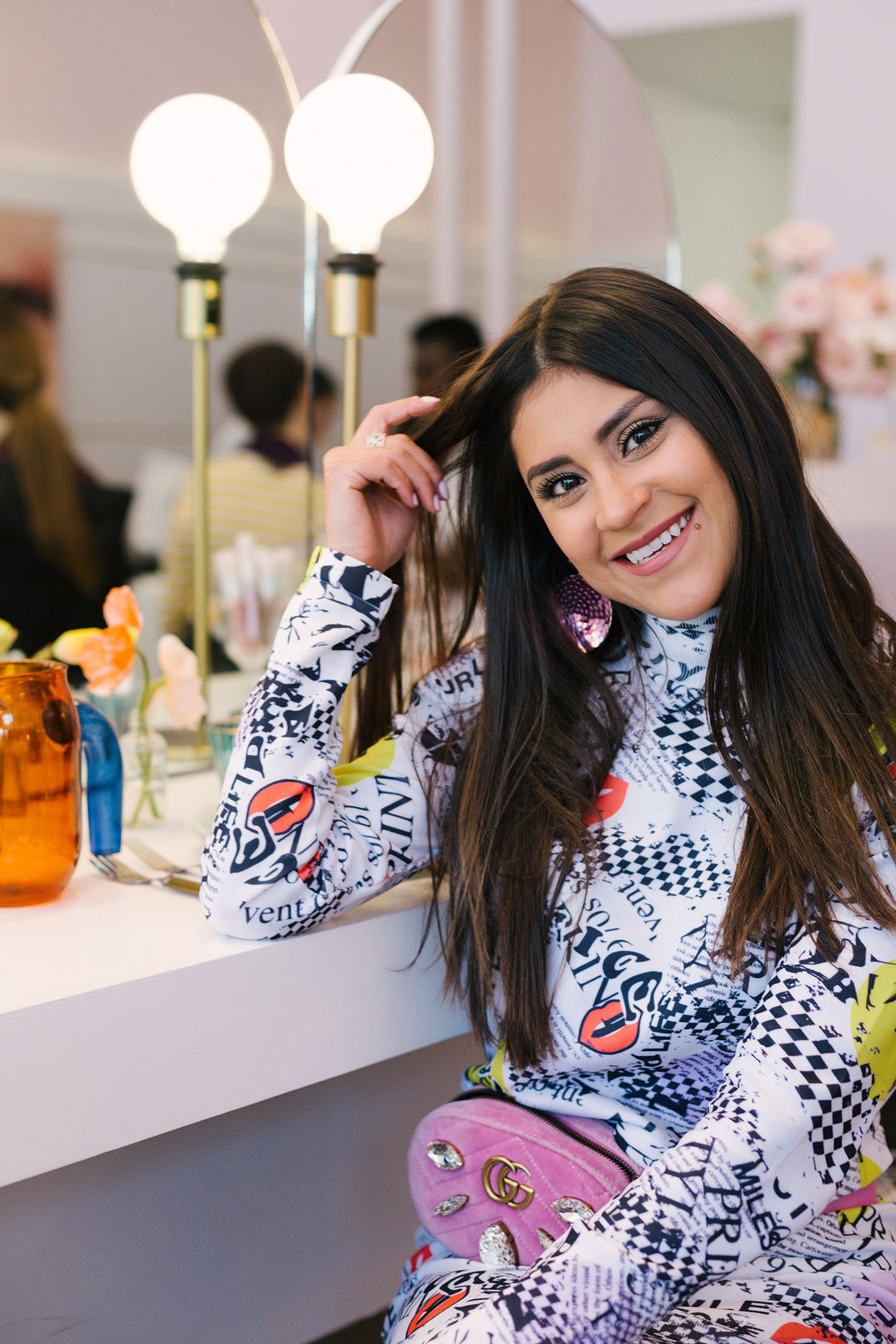